« Jansen and Rod Sing Some Songs 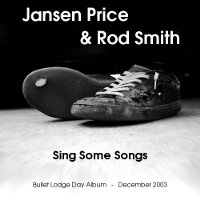 From the album Jansen and Rod Sing Some Songs, released December 2003

This song was very hastily created. All I did was record while I randomly played a part on the keyboard, and then I just recorded several parts on top of that in real-time.

There was no planning involved, no rehearsal. This is an example of raw music that flows and stands on its own.