I have a collection of random people's discarded shopping lists. I have been collecting since 1997. Currently I have 3,919 lists in my collection (last counted March 2004). 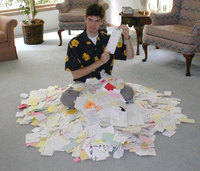 I started collecting shopping lists one day in 1997, while on a shift at the local grocery store I worked at. Two years later I had over 2,000 lists in a bin and nothing to do with them. I started what was called the "Sunday Shopping List Sample," where I would randomly select a list from the bin and type it up and email it to subscribers. In the first email, sent January 10th, 1999, I summarized how the collecting started:

I will give you some background on my shopping list collection. In case you didn't already know, I work at a grocery store and I collect shopping lists that customers leave around, in garbage cans, on the floor, and sometimes I attain them directly from the customer. They are very interesting to look at.

It all started one day, about two years ago when I was walking down aisle 7 and doing my usual thing i would pick up trash that was lying on the floor. I happened to pick up three small pieces of paper, and upon investigating them, I noticed that they were all shopping lists. I said to myself "Boy, I sure find a lot of these, I wonder how many I can get. I think i will start collecting them." And so I did. I now have 2,572.

You may ask, "Why collect shopping lists?", "Why post them on the web?", The answer: I don't know. Maybe it will give you a psychological view into the life of your fellow human beings, so, have fun looking at the shopping list sample, brought to you from the largest collection of shopping lists in the world. 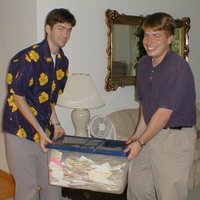 I have found out, that I am not the only shopping list collector: