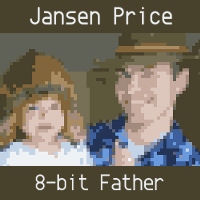 I always wanted to do a song with the sounds reminiscent of the good ol' 8-bit Nintendo games. Here is my offering. Since I recently had become a father when this song was written I called it "8-bit Father". It kind of sounds like it could be the game music for some western shooting game.